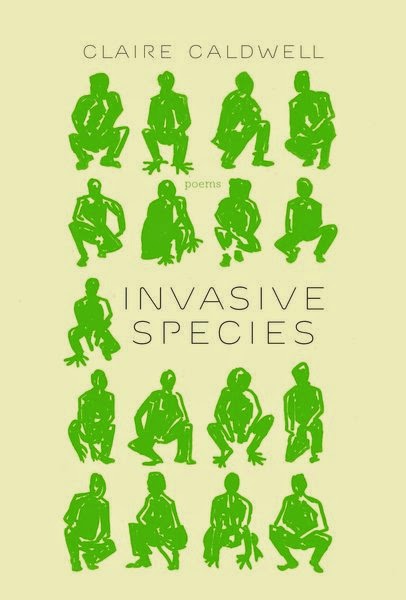 I had the great pleasure of sharing a stage with poet Claire Caldwell back in November at the Pivot at the Press Club Reading Series. Her debut collection, Invasive Species, was buried at the bottom of a stack of review copies I had at home, but I plucked it out after watching her performance. I’m glad I did: her poems are just as luminous on the page as they were recited aloud, and the collection ended up making my top 10 list for 2014.

Invasive Species covers a number of broad themes, from familial history and the bond that siblings share to our fraught relationship with the animal kingdom. These poems are as poignant, assured and cagey as poetry gets. Caldwell shows an incredible deftness for building the tension and emotion in a poem up to a pulverizing finish. On several occasions, her closing lines left me short of breath.

Here is an example of what I mean: this is the final stanza from her piece “A Seamstress Considers the Fourth Dimension”, a poem that plays with multiple meanings of the words skin and fabric:

Later, I’d be revered for my role
in emancipating the spiders
and silkworms. I’d live to see my silhouette
patchworked into public squares. Still,
there’s be no way to stop the great unravelling.
I would tan my own hide to save it.

That final jolt comes out of nowhere, with a self-deprecation that startles us with its cleverness. I found something similar in “There Is Nothing Left of Your Great-Grandfather.” Here, Caldwell begins by frontloading an inventory of possessions and attributes belonging, presumably, to her long-dead Great-Grandfather – the clothing and hair and books and fingerprints that were his touchstones of individuality, now gone. Yet, watch the ironic about-face that the poem makes at its conclusion:

No, there is nothing left of your great-
grandfather but his name,
its syllables knocking into one another.

This may very well be an allusion to an alliterative name, and a brilliant one if it is: the “syllables knocking into one another” and that explosive closer, “two red fishing boats,/ hulls bumping like lips.” The irony is that this name’s qualities do live on – in Claire Caldwell herself, since the words in her own alliterative name do exactly what these lines describe.

Beyond the references to close family bonds, what stands out most in this collection is Caldwell’s attention to the fragility of the animal world. In pieces like the title poem, as well “Bear Safety”, “The House with Snakes in its Walls” and others, we see gentle acts of metaphor and imagination alert us to this delicateness. She positions her images not to glorify animals or hit us over the head with a didactic message about protecting the environment, but to re-sensitize us to the beauty that comes with sharing this planet with other living things.

In short, Invasive Species is a startling debut and Claire Caldwell, at the age of 26, has announced herself as a natural-born poet.
Posted by Mark Sampson at 3:02 PM