Review: The Bear, by Claire Cameron 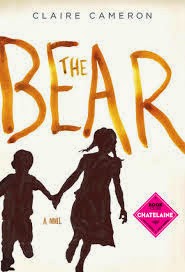 I will always wonder what my impression of Claire Cameron’s new novel The Bear would have been had it not included an author’s note at the beginning. The book tells the story of five-year-old Anna who is camping in Algonquin Park with her parents and her almost-three-year-old brother Alex (nicknamed “Stick”) in 1991 when their camp is attacked by a bear. Her parents are killed but she and Stick survive after her father hides them in a Coleman cooler in the moments just before his death. Most of the rest of the novel details Anna and Stick’s journey of survival in the park until they are rescued. In her foreword, Cameron details the inspiration for the story: she was in her late teens working as a guide in Algonquin Park in 1991 around the same time that a couple was killed in a very similar manner. Haunted by the tragedy, she wanted to write a novel about it, and added the fictitious kids.

This author’s note provides quite a bit of context for this but also does a lot of the work for the reader – work that I wish Cameron had left me to do on my own. Because her novel is a first-person narration told from the perspective of a five-year-old, much of what occurs during the bear attack and its aftermath is oblique. Anna’s vocabulary and insights into what has happened are understandably limited, and part of the joy of reading this book, I suspect, would have been to parse out the events as they unfolded through Anna’s still-developing consciousness, with only the novel’s title and a bit of spoiler-free jacket copy as guides.

But since the foreword takes this possibility away, the reader needs to find his literary jouissance elsewhere. The author’s intention seems to be for us to marvel at how accurately she captures the inner world of a five year old, and for the most part Anna’s voice is bang on. Her syntactic peccadilloes ring true for her age—the repetition of terms, for example, and the substituting of adjectives for nouns—and her elisions as she and Stick try to find something to eat and some shelter for the night are very telling. Still, there are times when her narrative perspective slips. I’m not the first reviewer to point out that Anna seems to have a bit more history at her disposal than would be plausible – there are flashbacks to “that time” Stick went missing at the cottage, or “that time” he got a bee sting, that seem to span back longer than she would likely remember – and her vocabulary and ability to think metaphorically are a bit too advanced for a five year old.

But the one joy that comes through flawlessly in The Bear is the partial but telling view that Anna gives us on her parents’ relationship. We get little impression of them during the bear attack itself, but Anna slowly reveals – in her wonderfully imperfect way – that theirs had been a marriage on the skids. We know the couple embraced in a kind of gender essentialism: Daddy goes out and works; Momma stays home with the kids; Daddy is a source of discipline and bad tempers; Momma is the source of kindness and cuddles and nurturing. There is obviously something awry with the parents’ dynamic and we’re never quite told what it is. Are they struggling financially on one income? Has there been an extramarital temptation? Did the dad not really want kids but slowly comes to accept his familial responsibilities? We’re never told. But Cameron creates enough wiggle room for our imagination to fill in the blanks, and this a delightful thing to find in any novel.

And it should be said that The Bear’s achieves a deeply moving finish. The kids are eventually rescued and are taken into the care of their grandfather and a conscientious social worker. The grandpa is a devastating role in the novel: he is dealing with both his grief over the death of Anna’s parents and his need to care for these now orphaned children. There is a great scene where he is giving Anna a bath and braces her head in the water in the same manner that her mother did. It is a great moment of nurture that provides the young girl with a much-needed sense of continuity.

The Bear closes with Anna and Alex returning 20 years later to the site of their parents’ death, and Cameron wisely does not overplay the moment. The two are moved and nostalgic, but their response is deeply human rather than hokey. It’s a great ending to this emotionally rich if somewhat flawed novel.

Posted by Mark Sampson at 5:55 PM No comments:

Review: Honey for the Bears, by Anthony Burgess 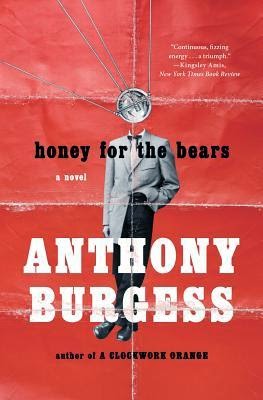 There’s a wonderful story – probably not apocryphal – about the first edition of Anthony Burgess’ Honey for the Bears, published in 1963, which centres around the following line from Chapter 1: “And this man Opiskin can get you formicating little peasants into such a lather …”, “formicating” being a delightful play on the term formication, meaning the sensation of having insects crawling all over your skin. Of course, a thoughtless editor at the publisher didn’t realize this was an actual word and assumed that Burgess had made a typo, and thus changed the “m” to an “n” on the proofs. Lynne Burgess, Anthony’s violent, alcoholic, nymphomaniacal shrew of a wife, caught the embarrassing alteration only after the book came back from the printer, and reportedly flew into a gin-fueled rage that got the editor fired.

This wordplay (restored in subsequent editions of the book) is not atypical in Honey for the Bears, a novel that practically pulsates with Burgess’ trademark brand of linguistic creativity. The story revolves around Paul Hussey, a British antiques dealer who travels by ship to the Soviet Union with his wife Belinda, ostensibly for a vacation in Leningrad but really to sell high-end drilon dresses to the fashion-starved Russians on the black market. He’s doing this as a favour to Sandra, the widow of his dead friend Robert, who regularly made such smuggles into the Soviet Union.

But the plan goes comically awry in so many delightfully Burgessian ways: Belinda comes down with a painful rash that sees her carted off to a second-rate Russian hospital shortly after their arrival, and Paul is soon hounded by two members of the Soviet secret police looking to bust him in the midst of his scam. To complicate matters, it comes to light that Belinda had a lesbian love affair with Sandra behind Paul’s back, and is now planning to leave him for the female doctor who treats her at the hospital. Paul, meanwhile, has some rather strange experiences that challenge his own sexuality, and this culminates with him attempting to smuggle out the son of the aforementioned Opiskin (a talented composer, greatly admired by Paul, who was suppressed by the Soviets). This involves Paul dressing the lad up like a woman so he can pass as Paul’s wife on the Helsinki leg of the trip home.

There’s much to admire in this garlicky, rambunctious romp of a tale. Burgess, for the most part, doesn’t overplay his hand in pointing out the Cold War differences between the Soviet Union and the culture Paul would be accustomed to in Britain. There is the refrain – spoken by the Soviet agents – about how Paul is looking to damage the Soviet economy by bringing in foreign wares, as if the drilon dresses were an invasive species being introduced into a delicate ecosystem. But it’s fun to be reminded that this had once been a national mentality in Russia, before the collapse of Communism and the concomitant globalization of trade. As well, Burgess’ humour is spot on in these pages; you probably need to speak fluent Russian—plus about three other languages—to catch all the puns here.

Still, there are issues. Once you’ve read enough of the Burgess oeuvre, you start to notice what might be described as the careless repetition of tropes. In Honey for the Bears, this means violent youths (A Clockwork Orange), alcohol-fueled shenanigans aboard a ship (Tremor of Intent) and the need to save and protect a young man with a somewhat messianic relationship to music (Beds in the East). Also, the ending of Honey For the Bears gets bogged down by a rather trite conversation between Paul and his Soviet pursuers, about the nature of freedom, after the two catch up with him in Helsinki.

But overall, this is one of Burgess stronger, more comic performances. Some of the references and relationships in the novel will seem dated to a 21st-century reader, but this in no way makes Honey for the Bears any less sweet.

Posted by Mark Sampson at 6:17 PM No comments: 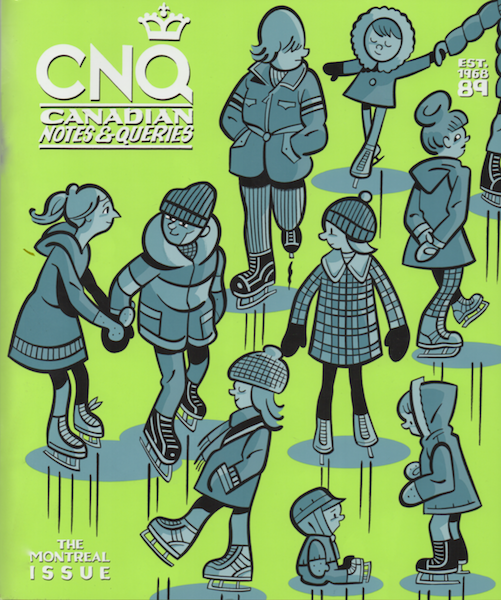 So I received my contributor's copy of Canadian Notes & Queries (CNQ) #89, which contains my review of Douglas Glover's fabulous new short story collection Savage Love. This book simply blew me away and I was very disheartened (though not terribly surprised) that the various literary award juries overlooked it last year. But Glover is the quintessential writer's writer and you should definitely be reading him.

This issue of CNQ is labelled "the Montreal issue" and contains a number of interesting pieces from that city's great literary scene. There are pieces by or about Irving Layton, Robyn Sarah, Marko Sijan and other prominent Montreal writers.

Also: the cover is perfect for this winter that just doesn't seem to want to end: an old-fashioned community skate. It's probably the best cover that artist Seth has done for CNQ, and that's really saying something because they're all pretty fabulous. Anyway, on better newsstands now - go check it out!

I realize we're still six months out, but I just wanted to let y'all know that the Toronto launch party date for Sad Peninsula is confirmed. The event will take place on Tuesday, September 30 at Ben McNally Books on Bay St. Really looking forward to sending my novel out into the world at what has become my go-to bookshop here in Toronto. More details to come as they develop.