Photos from my time at Kingston WritersFest

Barbara Bell, the artistic director of the Kingston Writersfest, kindly emailed me some pictures last night of my appearance there back in September, so I thought I'd share them with you. This was my first time on the lineup for a literary festival, and Barbara and her team were all stellar in their planning and organization. Hope they have me back again some time! 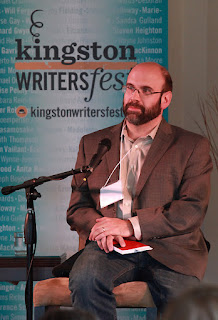 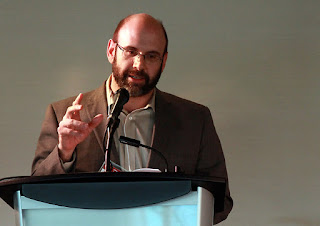 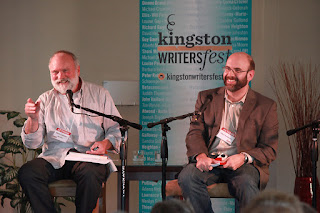 Posted by Mark Sampson at 7:20 AM No comments: 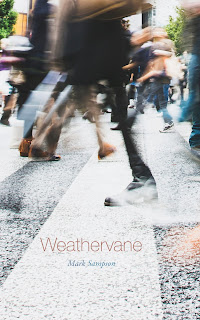 Lordy lordy, it's technically not even winter yet and I'm already turning my mind toward spring - specifically the launch of my debut poetry collection, Weathervane (Palimpsest Press, 2016). To that end, I'm very excited to finally reveal the book's kick-ass cover design, developed by the multi-talented Dawn Kresan. This rendering, I think, really captures the manic, frenzied nature of the verse within and the sense of displacement expressed in so many of the poems.

I've also got some blush-inducing back cover copy to share, crafted by poetry editor extraordinaire (and talented versifier in his own right) Jim Johnstone. Ahem:

A book of poems that’s as unpredictable as the seasons that guide it, Weathervane is part eco-tourism, part domestic nocturne, and part tempest. In a shifting world, Mark Sampson resounds like a modern Zeus, advising his readers to “wear galoshes, / even if it doesn’t rain.” Weathervane is an intensely personal, alchemical debut from an accomplished new voice.

Finally, I also want to point out that the collection is now ready for pre-order from the usual suspects, such as Amazon, Chapters-Indigo, and other online retailers. As with any other book, the faster you put an order in for a book (if you are in fact going to order it), the better.

Anyway, that's it for now. I'll post about other developments as they arise.

Posted by Mark Sampson at 9:09 AM No comments: