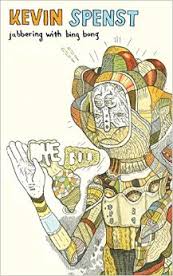 Pop culture references abound in Kevin Spenst’s debut poetry collection, a full-length trade publication coming on the heels of several well-received chapbooks. Jabbering with Bing Bong marries itself both to concrete places – Surrey, BC features prominently – and a concrete sensibility, one we could dub “Gen X nostalgia.” Spenst weaves allusions to Nintendo 64, Kmart, Judy Blume (though misspelled here as “Bloom”), Star Wars, MC Hammer and other touchstones belonging to the children of the 1970s.

I myself fall into this category, and many of these references cling closely to my own youth’s experiences and consumption. And yet I didn’t find the references possessed the heavy-handed weight of an obvious hallmark. This is both a good and a bad thing. Spenst is especially strong in the confessional-lyric mode, and he’s able to twist and bend a snatch of narrative to his own purposes. Here’s an example of what I mean, from the poem “Expo ‘86”:

The world exposition
was guilty by association. My mom
asked if I wanted to go

with my grandparents
to a preview event. I didn’t
know the whoop-di-do

of a punk band mooned
the crowd and their sound was
cut.

On the one hand, this is straight story divvied up with seemingly random line breaks. But on the other, Spenst has cannily built a momentum through a skillful arrangement of colloquial and arcane terms. He knows how to take a quirky anecdote and light it ablaze.

Unfortunately, I found myself wishing he would apply a similar inventiveness to his pop culture references. Too many times, these felt more like zeitgeist name-dropping and less like a malleable catalyst to something truly creative. “Death Star Trash Compactor” is an example of a poem where a memorable movie moment (those screaming rebels Luke, Leia and Han saved in their garbage heap trap by a quick-thinking droid) is used as stand-in for other allusions to the 1970s and 80s. But the paring seems a bit too neat – I would’ve almost liked to see Spenst go half-cocked in this poem, take the ideas around the Star Wars characters and twist them off into outer space, give us something truly weird and unforgettable rather than a staid series of easy metaphoric comparisons.

Still, there’s a great deal of fun to be found in Jabbering with Bing Bong. Spenst knows how to lure you in to his world, make the familiar strange and the strange familiar. He can also be very funny. He writes with the insouciance of a poet who has already accepted the strengths and weaknesses of his own voice, and can write a debut collection that reads like much, much more.
Posted by Mark Sampson at 6:00 PM No comments:

My review of Mirrors on which dust has fallen, by Jeff Bursey ... 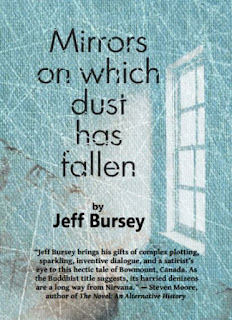 ... was posted to the Numero Cinq website this morning, my first time writing for this well-respected online literary journal. I initially turned the assignment down when editor Douglas Glover (who should need no introduction around these parts - see my reviews of his work here and here) reached out to me, as Jeff has become a friend in recent years and I was uncomfortable reviewing him. But Glover sagely talked me into taking the assignment, and I thus turned it into an exercise on how to write a (at least I hope) credible and balanced review of somebody I socialize with. I have fairly fixed rules in my head about how to handle such pieces - at least for real publications like Numero Cinq, and less so for the mental dribblings I throw up here on the blog - and these rules mostly have to do with disclosure, tone, and a heightened sense of balance. Book reviewing is, for all its warts, an act of journalism, and we should stay forever attuned to the strictures of trustworthiness when reporting on those whom we know personally in the community - especially in a literary one as tiny as Canada's.

I won't say much more about Jeff's novel beyond what's in the review, other than to stress that it's a fascinating companion piece to his 2010 novel Verbatim and a book that readers should brace themselves to be challenged by. 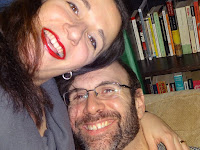 Perhaps it’s fitting that on the eve of the third anniversary of my marriage to Rebecca Rosenblum I finished reading Joan Didion’s memoir The Year of Magical Thinking. Didion’s book is, on the surface, about loss and grief and mourning, but I also saw it as a very touching portrait of what it means for two writers to be married to each other. Marriage in general has become a lifestyle choice I’ve heartily endorsed over the last three years, but being married to another writer has not only exceeded my expectations but has become pivotal to my day to day existence. This is something I think Didion understands really well.

The truth is, before I met Rebecca I couldn’t fathom being hitched to another scribbler. The idea seemed a bit terrifying. Would we be competitive? Would our obsessions and eccentricities trip over each other? Would it constantly feel like someone else was playing with my toys? Now, I can’t imagine being with a non-writer. I can’t imagine putting someone through such a thing! Rebecca has become more than just my first reader, a tolerant roommate tolerating my early- (very early, too early) hour writing sessions, the first person to show up at my readings and the last one to leave. She is the sound the pebble makes at the bottom of the well to tell me how deep it goes. She is the soil in which all good things grow. It is no coincidence that my writing life – and my life-life – has soared since 2012. I know where all this light originates from.

There is a passage in Didion’s memoir that is especially devastating, but one that resonates so much with the atmosphere of the Sampenblum household. It is involves the last birthday Didion had before her husband John died abruptly from heart failure. He's in the living room rereading one of Didion's novels, a section very technically complicated, and he begins reading it aloud to her. When he finishes, he says,

"Goddamn ... don't ever tell me again you can't write. That's my birthday present to you."
I remember tears coming to my eyes.
I feel them now.
In retrospect this had been my omen, my message ... the birthday present no one else could give me.
He had twenty-five nights to live.


How many times have I expressed this exact sentiment to my wife? Pretty much every time she shares a new piece of writing with me. This is what it means to be married to another writer. It means having someone there who knows how complicated what you do can sometimes be, and what you have to put yourself through in order to pull it off. Someone who can say, This is what we both do. This is what we both are. So let’s go do this, and be this, together.
Posted by Mark Sampson at 2:27 AM 4 comments:

My Quill and Quire review of Makarska, by Jim Bartley ... 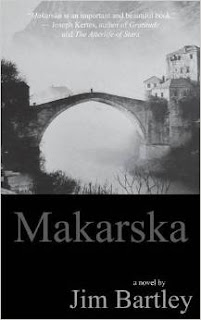 ... is now online on the Q&Q website. Makarska is an interesting addition to the growing corpus of fiction by Canadian writers focused on the conflicts of Eastern Europe in the 1990s. Other titles include the Cellist of Sarajevo by Steven Galloway and Braco by Lesleyanne Ryan (which I also reviewed for Q&Q). Some of you may remember Jim Bartley as the Globe and Mail Books section's first fiction reviewer, and he proves himself equally competent in the realm of fiction with this touching and often harrowing story. Definitely worth checking out, especially if the subject matter is of interest to you.

Posted by Mark Sampson at 7:01 AM No comments: