My review of Sweetland, by Michael Crummey ... 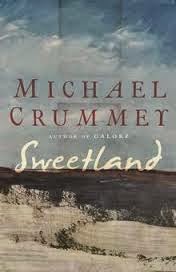 ... published in Canadian Notes & Queries (CNQ) #92 happily arrived in the mailbox late last week. As you'll find out when you go pick up a copy of the issue, I felt that Crummey's new novel isn't quite as good as his last, the magic realist masterpiece Galore, but I like it a lot all the same. Definitely a novel worthy of its recent kudos and worth picking up.

Getting the latest issue of CNQ is always cause for excitement around the Sampsenblum homestead, but it was especially the case this time around. Rebecca also has a lovely essay in there called "How to Learn to Read (If You Don't Know Already)." The issue also includes fiction by the ever-stylist Russell Smith, poetry by Shane Neilson and Marc di Saverio, reviews by Kerry Clare and Laura Bast, and an essay by editor Alex Good that is already causing some chatter. Anyway, I'm looking forward to tucking into this issue soon, and I hope you'll do the same. 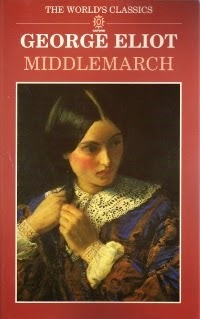 When it comes to one’s reading habits, influences can be a curious thing. My knowledge of the work of George Eliot (born Mary Anne – or alternatively Marian – Evans, 1819-1880) is based wholly on the fact that I read two of her novels when I was 20 years old: The Mill on the Floss, which I loved immensely, and Middlemarch, which I flat-lined through. I’ve been meaning to reread the latter for years, since so many people I admire say that it’s a work of genius and worth a second chance.

This desire was exacerbated by a recent slew of articles about Middlemarch that have come in over the transom. Rebecca Mead, a staff writer with The New Yorker, has published a number of pieces about the book, which have been collected in her well-reviewed nonfiction title, My Life in Middlemarch. As well, I was impressed by this Open Letters Monthly essay on Eliot’s masterpiece by Dalhousie University professor Dr. Rohan Maitzen. The universe seemed to be speaking to me: it was time to give Middlemarch another go.

I had read The Mill on the Floss in 1995/96 as part of a course called Fictions of Development, taught by Maitzen’s colleague at Dalhousie, Dr. Marjorie Stone. I was blown away by Eliot’s rich portrait of the novel’s protagonist, Maggie Tulliver, and her relationship to her brother Tom. The story unveiled for me so many revelations about desire, sibling loyalty, and the suffocating circumstances of small-town life. Shortly after the course ended, I turned my attention to Middlemarch, but found that that novel possessed none of the spirit and zest of its predecessor. I did manage to finish all 700+ pages, but by the end I was left asking: What the hell was that? The novel’s early sections felt bogged down by that endlessly tiresome question from 19th century English literature: Who should I marry to get the best leg-up in life? And the story seemed strangled later on by countless subplots that I struggled to care about.

Rereading Middlemarch almost 20 years later has been an eye-opening experience to say the least. I’m now pushing 40 and happily married, and this lends a certain insight that I didn’t have before. This time around, the character of Dorothea Brooke – who passes as the closest thing this long, multi-perspective epic has for a protagonist – strikes me as someone wholly compelling. She is a woman awakening to her own intellectual possibilities at the same time that she’s awakening to the mistake she’s made of marrying a man, the religious scholar Edward Casaubon, whom she cannot love. This time around, the characters of Fred Vincy and his vapid sister Rosamond, the desperate physician Lydgate (who marries Rosamond and then promptly regrets it) and the landowner James Chettam, all come off as well drawn and rich in dimension. I also spotted the great comic turns latent in the text, borne from antics of the drunkard John Raffles and the cursing Mr. Hawley, who pits himself against the town banker Nicholas Bulstrode. In many ways, Middlemarch is a very funny book.

Yet a pulse of severity throbs throughout this text. What I saw 20 years ago as simple marital tediousness now strikes me as something far more sinister. Middlemarch is, in many ways, a story about the tests our fidelity goes through in the face of poor decision-making. This affects many characters, but none feel it more succinctly than Dorothea. She owes much to her marriage to the frustrated Casaubon, and yet cannot escape the fact that she has sold herself a bill of goods by handing her life over to him. I doubt the following passage, taken from a scene when the two are on their extended honeymoon together in Rome, would have struck a cord with me when I read it the first time. But this rumination hit me between the eyes now, reminding me of how grateful I am that I married someone who opens doors in my world rather than closes them:

How was it that in the weeks since her marriage, Dorothea had not distinctly observed but felt with a stifling depression, that the large vistas and wide fresh air which she had dreamed of finding in her husband’s mind were replaced by anterooms and winding passages which seemed to lead nowhither? I suppose it was that in courtship everything is regarded as provisional and preliminary, and the smallest sample of virtue or accomplishment is taken to guarantee delightful stores which the broad leisure of marriage will reveal. But the door-sill of marriage once crossed, expectation is concentrated on the present. Having once embarked on your marital voyage, it is impossible not to be aware that you make no way and that the sea is not within sight – that, in fact, you are exploring an enclosed basin.


One suspects that this sentiment captured the mindset of many 19th century couples – men and women both. This is the other telling aspect of Middlemarch that I missed the first time around. The book frames the individual lives of people struggling with their decisions into a broader social context – that of societal reform happening in England in the first half of the 19th century. This is not something Eliot merely Frankenstitches onto her plot. Electoral reform, challenges to class distinction, and policy changes to public health all play a crucial role in showing how evolution in the community of Middlemarch is happening right under its citizens’ feet. Indeed, one gets the sense that these characters are trapped in a kind of interregnum between an old period and a new, and that they will not be the generation that enjoys the fruits of these societal changes. This lends the story a certain air of tragedy.

But still, love conquers all – and Dorothea answers the challenge that comes in the wake of her husband’s sudden death: should she now marry for love (that is, marry the artistic Will Ladislaw, whom she’s been pining for), thus forfeiting the estate that Casaubon left for her? The novel’s various statements about loyalty and change all culminate in this final point. We’re not surprised when Dorothea’s ultimate decision scandalizes the town, but the town is not surprised when the scandal passes and a new norm seems to emerge. Maybe love does matter. Maybe fidelity has several dimensions, not to mention a statute of limitation. Maybe the world moves on whether we want it to or not.

How much did I love Under the Visible Life, by Kim Echlin? 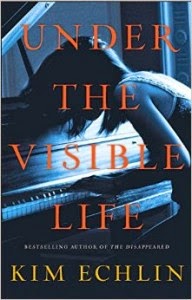 Well, to find out you could read my Quill & Quire review of this new novel, wherein I turn phrases like "[this book] delivers a clinic on how to conjure emotions readers didn’t even know they had" and "as powerful as any depicted in fiction" and "This book is nothing short of a masterpiece."

Or you could check out this humorous exchange that erupted last week on Twitter between Quill & Quire reviews editor Steven Beattie, Globe Books editor Mark Medley, and myself: 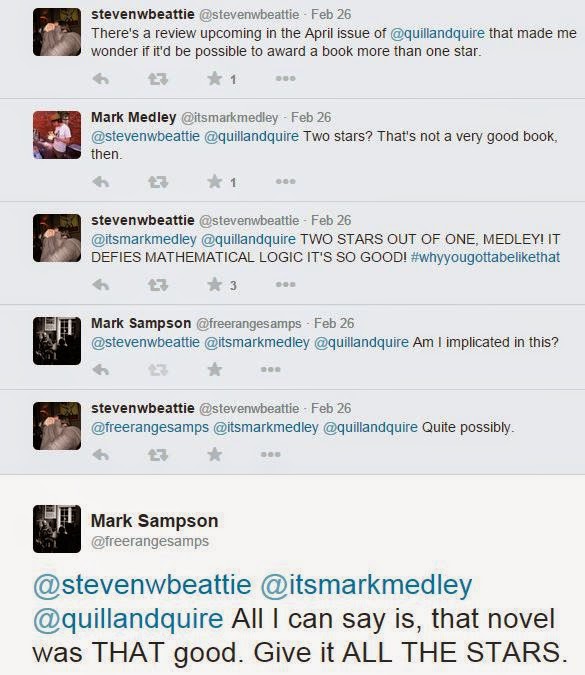 Or you you just got out and pick up a copy of Under the Visible Life and see for yourself. Reading this novel in advance of its release, I felt like I was let in on a delicious secret that the rest of the world is going to wake up to very shortly. Few books have affected me in a way that this one has. It is a devastating portrait of two friends and the lengths they go to liberate their own creative agency. Simone de Beauvior once wrote that it is better to be free than to be happy, and this novel lives those words on every page. Do yourself a favour and give it a read.

M.
PS: Apologies for the radio silence here on the blog for the last few weeks. In my defence, I've been re-reading Middlemarch. More on that soon.

Posted by Mark Sampson at 10:33 AM No comments: