Okay everybody, one last reminder from me. Tonight is the Toronto launch party for Sad Peninsula. If you're free and can make it out, I would love to see you. Here are the details:

Interview with me in Open Book Toronto

I just want to alert y'all to this lovely interview with me that appeared on the Open Book Toronto website yesterday. Not only do I talk about some of the themes and characters in my novel, Sad Peninsula, but I also let readers in on my daily writing rituals and what I've been reading lately. Anyway, thanks to OBT for giving me some digital ink. Check it out.

Posted by Mark Sampson at 6:15 AM No comments:

An interview with Ron Schafrick 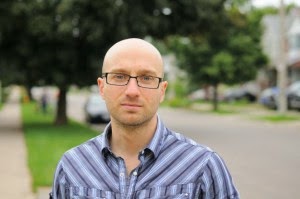 So I'm back on Canadian Writers Abroad today, this time to interview fellow Toronto author Ron Schafrick about his killer debut collection of short stories, Interpreters (Oberon, 2013). These seven tales take a fresh, unique approach to the standard expatriate narrative, told mostly from the perspective of gay men trying to find a sense of self and of belonging in a foreign country. In this interview, Ron talks about the extreme emotions that his time in South Korea engenders in him, and how the country continues to shape and influence his imagination. Anyway, thanks to Debra Martens for asking me to do this, and thanks to Ron for being such a generous interviewee. Check it out!
Posted by Mark Sampson at 6:14 AM No comments: 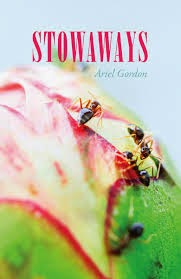 I feel like this review requires more than one ‘full disclosure’ from me. I’ll confess that I’ve known Ariel Gordon since the 1996/97 academic year, when we were journalism students together at King’s in Halifax. I’ll also confess that I myself have entered into a relationship with her publisher, Palimpsest Press, which I’ll be making an announcement about in the coming weeks. What else? Should I mention that I spotted a number of Ariel’s poems when they were first published in literary journals, and admired them immensely? That they whetted the appetite to read a full collection of hers? Is that something one needs to disclose?

At any rate, I would still say that Stowaways is a delightful and energetic sophomore outing even without these tenuous connections to its author. The poems in this collection grapple with both the wild and the mundane, the animalistic nature of nature and relentless responsibilities of parenthood. Many of these pieces, especially in the first two parts, are in fact about collisions between the feral world and the domestic one. In poems like “Wingless Females”, “Little Pig,” and the collection’s title poem, Gordon (switching to the surname now; this is a review, after all) shows us how the natural world can insinuate itself into small, household moments. From the latter example:

I was glaring at the roof of the car
when I saw the wood tick
on your neck & when you lowered
the window & tossed it out, its legs skittered
against the dray ridges of skin
on your thumb

In each of the poems mentioned above, we see how the feral and domestic are not separate spheres that never touch; they are in fact informed and influenced by each other, in lots of small, startling ways. As if to remind us of the omnipresence of nature, Gordon peppers a number of her pieces with little asides of birdsong, from geese, grackles and other fowl.

There is also a great deal of playfulness to be found in Stowaways, especially in Part 3, which is a compilation of how-to poems. We get everything from “How to Make a Collage” and “How to Treat Leprosy” to my favourite, “How to Be Angry in Public”: “For use when women are on opposite sides of busy roads or being successfully restrained by spouses or members of one’s book club.” Here, Gordon is unafraid to stretch her funny bone for the pure zest of it.

I did have a few gripes, here and there. A few how-to poems bled into Part 4 of Stowaways, with no real explanation as to why they weren’t included in Part 3 with the others. There were some questionable punctuation decisions with a number of the pieces, especially in Part 1. And I also felt the collection would have ended much more strongly on “Apparent Magnitude: the Finlay 15P,” rather than making it the penultimate poem. This piece is a tiny tour de force about the astrologer William Henry Finlay, and its lines loop and swing and sparkle across our night sky like the very comet it describes. It also ends on the single-most devastating line in the collection, “(My father died alone)”, which would have been a much stronger note to finish on.

But small quibbles about a strong book. Gordon shows she’s got the chops to write in a number of modalities, and has a rich variety of subject matter in her brain to keep us guessing what she might write next.
Posted by Mark Sampson at 6:31 PM 1 comment:

Okay, so I'm very excited to announce that I've got some additional events confirmed for Sad Peninsula (including a mini-tour of the Maritimes in December, which I'm very excited about.) Here are the newest additions to the tour, in chronological order:

So if you're in any of these cities and can make it out on the nights listed above, I'd love to see you. And as always, please check out my events page for the full list of upcoming and past events. (If you run a literary event series and want me to come read, please drop me a line.)

Me on the 49th Shelf

So today is actually my birthday, and the morning started off with many fine things: a series of delightful gifts from my wonderful wife; weekday waffles (so decadent!) for breakfast; and the good folks at the 49th Shelf posting this piece by me, "Lives Abroad", on their website. In this essay, I talk about a number of works by Canadian authors that either helped inspire Sad Peninsula or share a kinship with it. I include fiction by Margaret Laurence, David Bergen, Esi Edugyan and others. I consider this a nice little intro list into Canadian expat writing or writing about life aboard, so you should check these titles out if you haven't already. (And Sad Peninsula, too, of course.)

Posted by Mark Sampson at 9:12 AM No comments:

So I'm very grateful to Dundurn for publishing this interview with me on its website yesterday. Here I talk about the themes and some of the inspiration of my new novel, Sad Peninsula, how I came up with the title, and the level of research involved in writing the story.

Dundurn has been pushing the book pretty hard since it was released last weekend. It's available in bookstores nationwide and also available through many online retailers. Anyway, I'll have more news to report on the book shortly, so stay tuned for that!


Posted by Mark Sampson at 9:02 AM No comments:

My Quill and Quire review of Sons and Fathers, by Daniel Goodwin ... 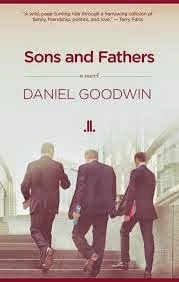 is now online on the Q&Q website! I really enjoyed this novela lot. Being someone with a hefty background in journalism and corporate communications, not to mention a few fraught male relationships myself, I really found quite a bit to relate to in Goodwin's debut. More to the point, he writes extremely well, making the transition to fiction seamlessly. I'd be happy to read something else by this guy.

Posted by Mark Sampson at 9:28 AM No comments:

Alright cool cats - today's the day. After four years of writing and another two and a half years in the queue, Sad Peninsula officially goes on sale TODAY nationwide. I'm just so incredibly grateful and relieved to see this thing finally out and about in the world. Bookshops around the country have it on shelves; libraries far and wide are ordering copies; and rumours of reviews are emerging. All in all, I couldn't be happier right now.

I just want to take some time here to thank Shannon Whibbs, Jim Hatch, and the entire team at Dundurn for taking a chance on this novel and bringing it to the market. These folks fight the good fight every day, and my cap goes off to them. I also want to thank my wife, acclaimed short story writer Rebecca Rosenblum, for her continued support, encouragement and advocacy for my work (and treating to me to celebratory drinks tonight in a ritzy, TIFF-infested section of downtown Toronto). Big kudos to my parents who have just been extraordinary in encouraging me throughout my now 23-year journey of writing fiction. And thanks to all my friends around the globe who have happily lent a sympathetic ear and eyeball to this long, complex project.