Review: Everyone Is CO2, by David James Brock 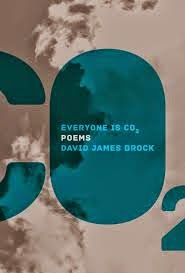 I had the great privilege of reading with David James Brock back in April at the launch of this year’s issue of Hart House Review (which published us both), and he really did steal the show. While Everyone Is CO2 may be Brock’s first full-length collection of poetry, you wouldn’t know it from either the book or his reading that night. There is a well-seasoned sense of accomplishment to this work, a trickster’s confidence in knowing exactly how to elicit the response he wants that belies the debut nature of this verse.

It may also have helped that I read this collection while in Las Vegas last month. It seemed an apt setting for a series of poems that balance the low and the high, the intricate layering of lyrical verse with relentless references to pop culture. Indeed, I actually read his piece “Las Vegas Mothers” while lounging poolside at a third-rate hotel on the strip while trying to choke down a $16 piña colada. The solace the poem provided proved immeasurable:

Each knows who her Las Vegas mother once was when the hoots
come from limousines wrangling tourists off the strip
to the titty bars. The Las Vegas mothers remember
the marquee’s hot gas glowing five colours. Having never seen

a rainbow on the outskirts, the prettiest daughters wait beneath
that neon cowboy while his arm jerks a lasso.
The Las Vegas mothers fear for a city learning its lesson,
that maybe this is the time, the boulevard won’t let go.

Notice here the oscillation between our standard perception of Las Vegas and its cold-eyed reality: the lethal gas used in neon promotes an image of a cowboy; a rainbow-less grit and dullness exist just beyond the city’s gaudy limits. Brock knows how to braid two opposing images into a cohesive whole, giving his subject an entirely new life of its own.

This is no more true than in the poem “Adam Yauch (Eightfold)”, a small masterpiece that weaves a loving tribute to the now-deceased member of the Beastie Boys with Buddhism’s Noble Eightfold Path. There are eight stanzas here – one for each of the Noble Paths as well as one for each of the Beastie Boys’ studio albums, quoting a lyric in italics. What emerges from this unconventional amalgam is actually small, lapidary bits of wisdom, testaments of how to conduct one’s life or see the world that surrounds us. Even in the seventh stanza, based on the Beastie Boys’ instrumental album, Brock manages to find words that keep the propulsion of the poem going:

If a vow of silence helps this mix-up, I’ll try. The mind might fight
that silence. I will visualize brain folds as elbows, keeping bullies
from butting to the front of the line. No words for this part. The
instrumental comes from the sound of static, a solid stretched taut,
sublimating … then disappearing. Am I doing this right?

Everyone Is CO2 taps into very specific periods of pop culture: from TLC’s “Waterfalls” and Sonic Youth’s Daydream Nation to the Rob Reiner film Stand By Me, the references here will resonate most with those born in the 1970s and `80s. Yet what comes of all this? An entirely new and fresh existence for these cultural touchstones, infusing them with an agency of their own. This is something that Brock does exceedingly well.
Posted by Mark Sampson at 4:52 AM