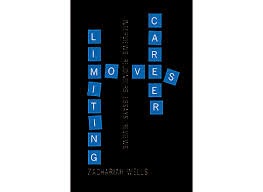 Zach Wells is incredibly good at Scrabble, or whatever the Facebook version of it is called these days. Anyone who has attempted a game against Zach (and I will refer to him here by his first name, as I have – full disclosure – known him for nearly 20 years and consider him a friend) is well aware that he plays to win and has a preternatural ability to score high on virtually every play. Like any truly good Scrabble player, Zach probably knows that it’s not the depth of your vocabulary or the letters on your slate that ultimately win you matches. It really comes down to knowing how to place your words strategically, to read the board and use those coloured tiles better than your opponents do.

So it’s probably no accident that the cover of his collected reviews and essays, Career Limiting Moves (a book that shares its name with his well-known blog), is laid out to resemble a Scrabble board. It’s as fitting a metaphor as any for Zach’s 10 years as one of Canada’s most vocal and pugnacious critics of poetry. While he is also the author of two well-regarded trade collections of his own verse, as well as chapbooks and other texts, he is probably best known for his sharp, incisive and oft-excoriating reviews and critical essays. Career Limiting Moves collects the best of these, and reveals a writer adept at setting words down with incredible precision and maximum impact.

As with Scrabble, it’s often possible in an essay to score a lot with relatively little. I was reminded of this in Zach’s piece “Soaked in a Heart of Sapphire, Delicate As an Origami Bird,” in which he takes the piss out of poetry award citations. At one point in the essay, he uses two words to describe the genre of purple, empty-calorie prose that often compromises these citations: “intrinsic mediocrity.” Just two words, and yet there is so much conveyed there, so much effect delivered on the page. He goes on to dissect the 2010 Gerald Lampert Award’s citation for Marcus McCann’s shortlisted poetry collection Soft Where, putting on an absolute clinic in just how a piece of writing can achieve what he calls “incredibad."

I must confess that I had already read most of what’s included in this essay collection, having subscribed to Zach’s blog for years and seen these pieces promoted there when they were first published in magazines and journals. Still, many of them reward multiple visits. I think his takedown of Jan Zwicky’s asinine essay about negative reviewing is a masterpiece, and provides a necessary framework to describe the mindset that continues to keep Canada’s literature in a protracted adolescence. Equally accomplished is Zach’s retort to Andre Alexis’ incoherent essay “The Long Decline,” published in The Walrus, in which Alexis bemoans the state of reviewing in Canada and places the blame (at least for part of the essay, before contradicting himself) on the shoulders of CanLit’s original shit-disturber, John Metcalf. Zach’s reply is written in the form of a rejection letter to Alexis, and is, like the Zwicky critique before it, a wonderfully crafted shredding of a flawed and small-spirited argument.

Yet, one should not presume that Career Limiting Moves is limited to snark. Indeed, the very best essay in this book is a piece called “Small is Powerful,” a glowing review of poet Souvankham Thammavongsa’s collection Found. Here, Zach puts on a tour de force of critical writing – combining biography, close reading and interview quotation to create not only a panoramic view into Thammavongsa’s art, but to forge a work of art in his own right. Anyone who dismisses Zach’s criticism as brutish needs to read this essay. Thammavonga’s minimalist verse possesses incredible power, succinct emotional arcs, and a vitality rarely seen in Canadian poetry. One gets the sense that Zach was deeply moved by its beauty, maybe even devastated by it, and could not wait to tell the rest of us about this singularly talented poet who may very well hold the mark of genius.

Not everything quite worked for me in Career Limiting Moves. I felt Zach’s critique of Anne Simpson’s Loop was a bit short for something so negative and needed more substantiation to back up his claims. And I remember his essay on the works of Don McKay to be a bit fairer when I first read it on poetryreview.ca. (I can’t tell if the essay changed before it was collected here, or if I have.) But still. There is a great deliberation and organization to these essays. Even the included interviews with Zach, in which he discusses some of his own poetics, fit very well with the rest of the book. He makes some interesting statements, for example, about man’s place in nature as a part of nature, which echoes across more than one of the essays included in the collection.

Ultimately, I think Zach will continue to be a controversial figure in Canadian criticism, if for no other reason than he holds up the dual torches of cogency and honest appraisal, which makes him a target for those who value neither. Zach’s largest critics tend to be those who not only fail to match his chops on the great Scrabble board of book reviewing, but who have a vested interest in incoherent criticism itself. Indeed, some have built entire careers around it. But for the rest of us, a book like Career Limiting Moves reminds us about the strengths – and the dangers – of standing behind one’s opinions. Of being honest. Of being clear. And of loving a good fight.
Posted by Mark Sampson at 7:02 PM