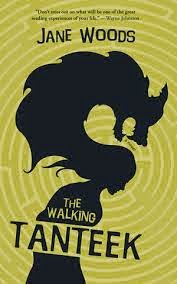 There is a scene of starling simplicity early in Richard B. Wright’s Giller-winning novel Clara Callan when his titular protagonist comes to a sudden, irrefutable realization that God does not exist. As young Clara documents in her diary:

I was sitting at the kitchen table after breakfast looking out the window at the snow on the bare trees and the blue sky through the branches. I was thinking of how the light is returning and of how different the morning sky now seems from only two weeks ago. And then it came to me as I sat there at the kitchen table looking out at the trees and the snow and the sky—I no longer believe in God. I have been feeling such intimations for some time now, but today, at twenty minutes past seven, it came to me clear and whole. God does not exist.


I was reminded of this passage over and over again as I read Jane Woods’ debut novel The Walking Tanteek, since it offers up a kind of inverse story (and writing style) to Clara’s stark, straightforward recognition of her atheism. There is nothing straightforward about The Walking Tanteek’s Maggie Prentice as she battles the competing forces of religious belief and secular materialism in this expansive and deeply comic novel. Mag Mary, as she is sometimes referred to (perhaps as a play on the Bible’s own Mary Magdalene), is an alcoholic voice actor living in Toronto who gets roped up with her twin brother Gerard, a fire-breathing and intolerant Christian minister who leads a kooky cult of misfits called the Untouchables. The story opens on the senseless death of a group of children in a car accident, and the sheer randomness of this tragedy looms over Maggie’s messy internal world through the course of her story. She constantly challenges the extremism of her brother’s religious beliefs, and by middle age falls back in love with an old flame from her hippie days named Liam, and marries him. But Liam’s own materialistic atheism (not to mention his shallow twit of a mother, Gail) soon awakens a need in Maggie to recognize the possibility – indeed, the inevitability – that there may be some higher power guiding our lives and all of existence itself.

Woods handles Maggie’s ongoing battles with great zest and aplomb. She perfectly nails so many aspects of her protagonist’s life – the careerism of acting, the soulless condo existence above Toronto’s Gardiner Expressway, the student life in Montreal’s McGill ghetto in the sixties – and weaves them well into this novel’s broader themes. She does an especially good job of capturing Maggie’s alcoholism in all its slurred speeches and bumbling clumsiness. Here’s a sample:

Yes, okay. I drink. And have for quite a while now, from long before I ever saw the inside of Gerard’s tumble-down, haunted house of holiness. Drinking feels like lighting a crackling fire inside my cold glass box. It feels, at the beginning anyway, like someone’s moving all the heavy furniture out of the way, clearing the dance floor for big fun and frolic that almost materializes every single time.


One can’t help but spot the exuberance of Woods’ style here and in other places. The Walking Tanteek (the title for which is taken, maybe, from a mondegreen that Maggie overhears in a Bob Dylan song) bursts with wild, elastic sentences that loop and spin and twist with baroque enthusiasm. Maggie is a deeply conflicted woman, and this narrative style helps to reveal just how all over the map she really is. Here is an example of how her inner world is shaped:

Five years of supposedly learning the nature of Divine love. Five years of clawing myself bloody in search of faith, of cringing before Gerard’s lacerating harangues, and suddenly love, actual love is standing right smack in front of me. Love with a  scrubbed face, walking up to say hi in the inscrutable language of heaven. There are no signs, no wonders. No repentance is required. There is just love, scrabbling a message like Anne Bancroft in my Patty Duke palm while my heart bursts like a supernova and all the crooked ways are instantly made straight.


Yet, despite this virtuosic writing style, there were times when the book seemed a bit elusive, if not overwritten. There is a long, rambling section in the middle describing Maggie’s student days in the sixties, and much of it feels like a pervasive Baby Boomer nostalgia rather than anything necessary to the plot. There were also times when I felt like I wasn’t really sympathizing with Maggie during her narration, since she appeared motivated mostly by the need to validate and sustain a life of indolence. She has several problems, of course, but many of them seem to stem from the fact that she really doesn’t want to do anything, ever. It was hard to take her side in her arguments with Liam, for example, since he seemed to be the one doing all the work (both literally and figuratively) in the relationship.

Still, there is no denying that The Walking Tanteek is a powerful, cosmic, and often very funny read. Woods seems to defy gravity itself as she sets up scenes of both hilarity and poignancy. I was surprised, in fact, that this book didn’t receive a bit more attention upon its release earlier this year, as it possesses a wholly original voice whose prowess is hard to deny.
Posted by Mark Sampson at 10:44 AM