Review: All My Puny Sorrows, by Miriam Toews 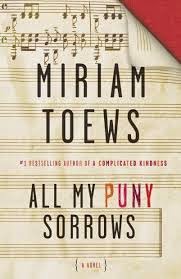 As I write the opening paragraph to this review, I am listening to Rachmaninov’s Prelude op. 23 no. 5 in G minor, a piece of classical piano that is at once virtuosic and oddly crushing in its intensity. It makes sense that this bit of music looms large in Miriam Toews’ devastating new novel, All My Puny Sorrows, a book about one woman’s emotional journey with a sister who is desperate to commit suicide. There are a number of ways to interpret the knuckle-dragging loops in Rachmaninov’s masterpiece – life affirming? ominous? – and this mirrors what we’ve come to expect in a Toews’ novel: a balancing of light and dark, of humour and pathos, of richness and repetition.

The story introduces us to Yolandi, a single mom and middling author of rodeo novels (do such things exist?) who escapes her suffocating small town in Mennonite Manitoba only to careen fecklessly through her love life, career and child rearing responsibilities. She clearly idolizes her older sister Elfreida, who is everything Yoli is not: wildly successful in her own career as a classical pianist and married to a solid, reliable man who worships the ground she walks on. Yet Elf’s own existence is fraught with disaster: Yoli watches her sister suffer from the most debilitating clinical depression imaginable (inherited from their father, who was also suicidal) that leads her to make several attempts to end her life. After Elf is nearly successful while home in Winnipeg getting ready for a world tour, Yoli engages with her sister from her hospital bed in a number of gripping exchanges about whether Elf should continue to fight her depression or whether Yoli should help her commit suicide.

It’s no secret that Toews took much of the inspiration for All My Puny Sorrows from tragedies her own life: both her father and sister suffered from depression and both ended up committing suicide. Yet despite this close hewing to the bone, Toews manages to keep her novel very much within the realm of fiction, dazzling us with her incredible eye for description, her ability to modulate between the comic and horrific, and a pristine sense of how themes and ideas in a novel can braid so perfectly together.

One of passages from this book that just floored me was this one, a succinct description of the anguish that Elf deals with on a near-daily basis:

I asked Elf if she was thinking about all of the reasons to stay alive or if she was only trying to figure out an exit. She didn’t answer the question. I asked her if those forces were constantly battling it out in her mind and she said if they were then it was a lopsided fight like Rodney King versus the LAPD.


Everyone I have known who suffered from depression or committed suicide would find much resonance in this passage. It encapsulates so perfectly the helplessness and sheer resignation that comes with the disease.

While All My Puny Sorrows dazzled me with its emotional heft, there were a few flaws that I found sprinkled throughout. I would have liked to see more about Yoli’s own life earlier in the novel; we really don’t get to truly know her until much later in the story. I also thought that the ironic binary established between these sisters’ lives – Yoli’s the fuck-up and Elf is the success, yet it’s Elf who wants to commit suicide – was overdone in places.

But these are minor grumbles. All My Puny Sorrows will most likely be counted as Toews’ own masterpiece, and deservedly so. The ending especially good, as it reaches for something ineffable about death: that life does not stop in the face of a heart-wrenching tragedy, and yet the tragedy can do nothing but remain with us even as time progresses. Toews finishes with moments of levity, and yet an almost unspoken absence remains. There is no way to fill that void, no way to get pass it. Death lives in us as much as life does. There is no way to spin it, no flurry of affirmation to get us beyond it. It is a loss. It is a loss.