Review: All Saints, by K.D. Miller 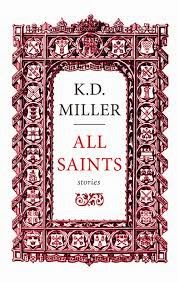 The collection of loosely connected short stories remains a fascinating subgenre of literature, one that still feels ripe with possibilities and permutations. I was reminded of this while reading K.D. Miller’s All Saints this past week, a work of fiction that centres around a struggling Anglican Church in Toronto and the lives that intersect with it. Miller knows two things very well: the effort and precision it takes to make a short story both its own isolated world as well as part of a larger narrative; and the emotional landscape of the Anglican faith, with all its anxieties and contradictions. She weaves these two elements into a powerful whole, creating memorable tales populated by characters full of both doubt and certainty.

Indeed, “doubtful certainty” might be a good way to describe the heart of your average church-going Anglican. Miller’s characters spend much of the time battling competing forces in their lives and trying to reconcile what they want with who they think they are. We see numerous examples of this throughout the book. In the tale “Ecce Cor Meum” (a Latin phrase meaning “Behold My Heart”) a woman named Kelly is in the middle of a health scare at the same time that she’s realizes that she’s in love with the priest at All Saints, a man named Simon. The fear she feels over the small polyp growing on her cervix is pared with the intense confusion she has over her feelings for Simon, feelings that both excite her and make her uncomfortable at the idea of finding love at this advance stage of her life.

In the story “Kim’s Game,” Miller introduces us to a unpublished poet named Owen, who gets roped into going on an excursion to a cabin with some fellow writers after taking a creative writing class at All Saints, and who subsequently gets lost in the woods around the cabin while out for a walk. This is one the strongest pieces in the book: Miller gives us incredible insights into the contradictions of Owen’s inner world: he loves to write but does not publish; he lives alone but seeks companionship; and he is lost (both literally and metaphorically) and yet is hesitant to cry out for help. Miller handles well the central metaphor of this story: that of Kim’s game, a creative writing exercise in which you stare at a number of objects on a table and then turn your back while one is taken away, and then try to identify which one is missing. It’s a clever symbol for Owen himself, who feels unnoticed and discarded by his companions on this trip. Miller also shocks us with a completely unexpected – and rather scatological – ending to this tale that catches us off guard and yet fits so well with where the story was building to.

Speaking of shocking, there is nothing that can quite prepare readers for meeting Miss Alice Vipond, the protagonist of “October Song.” Alice, a former school teacher, is exchanging letters with Simon, the priest at All Saints, where she had attended decades ago as a young girl. We soon learn that Alice is writing these letters from an insane asylum, where she has been incarcerated for most of her life after murdering her entire grade-two class with poisoned juice back in 1957. We only get her side of the letter exchange, but we slowly learn just how deeply complex this woman and her motivations are. “Vipond” as a name may conjure images of a viper, but there is more to Alice than meets the eye. Her murder of these children reminds one of that great quote from science fiction writer J.G. Ballard, “In a completely sane world, madness is the only freedom,” and Miller hints that she may be just as much a victim as anyone. Yet we can also tell that Alice unnerves Simon with questions about his love life, which involves the situation with Kelly touched upon in “Ecce Cor Meum.” The message we’re left with as Alice and Simon’s correspondence peters out is that both acts of love and acts violence are not simple, and sometimes we can put into words the emotions that move or motivate us.

There are similar themes spread throughout All Saints, and it makes for a powerful collection of interlaced stories. Miller writes with quiet grace, and her strong voice leads us through the careful layering of these tales. One of the best books I’ve read this year.
Posted by Mark Sampson at 2:57 PM