Review: This Location of Unknown Possibilities, by Brett Josef Grubisic 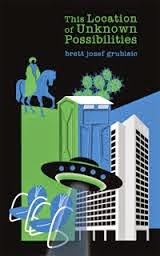 It’s nice to know I’ll be in good hands. As you may recall, back in November I had a short story collection accepted by Now or Never Publishing of Vancouver for release next year. While I wait for the launch date, I took the opportunity to read one of the press’s latest releases, Brett Josef Grubisic’s second novel, This Location of Unknown Possibilities. I’d seen Grubisic’s name around – mostly doing the occasional weekend book review for The National Post – but I’m happy to report that his true métier is clearly novel-writing. NoN has once again shown, ahem, impeccable taste by publishing this bold, bawdy, and downright hilarious sophomore effort.

This Location flips between the narrative threads of its two main characters: university professor Marta Spëk, an expert in the life of Lady Hester Stanhope (1776-1839), who gets hired as a consultant by a film studio that has decided – at least initially – to do a biopic of Lady Stanhope; and Jake Nugent, the film’s brash, priapic producer, who is about to give staid Marta a crash course in the topsy-turvy, lunatic world of commercial entertainment. Over the course of the story, the film’s script changes dramatically several times (it ends up as a cheesy sci-fi flick rather than an august historical movie), and both Marta and Jake find themselves on a quest for romance – only not with each other. Marta soon strikes up a relationship with an on-set dogsbody named Chaz while Jake sets out across the countryside on the hunt for anonymous bisexual encounters.

Grubisic shows a skilled hand at balancing these two characters’ threads, with lots of telling detail from both Marta and Jake’s worlds. We get a pitch-perfect portrait of the academic ladder that Marta half-heartedly climbs (Grubisic himself is a professor at a university in British Columbia), as well as Jake’s shallow, materialistic worldview that comes tinged with a desperate need for human connection.

What’s interesting, though, is that the various machinations of the plot – an injury on the set, the impromptu hiring of a waitress as the new star, the wrap-party shenanigans – are almost immaterial to the enjoyment of this novel. The real star here is the novelistic voice that Grubisic has created, so assured and observant and full of erudite wit. This Location contains a richness of language that immediately establishes a trust with the reader: no matter the twists and turns of its off-the-chain plot, you’re happy to follow them wherever they leads you.

Indeed, the comedy here is reminiscent of vintage Kingsley Amis or Evelyn Waugh, and This Location establishes Grubisic as a daring new satirist in the CanLit fold. I’m excited to be myself publishing a book with Now or Never, and honoured to be included among such talented company.
Posted by Mark Sampson at 5:31 PM